We have a STRONG SELL  on some Rare PCGS Graded coins and NGC graded coins !!!    if you have $100,000 or more invested in PCGS graded coins we urge  you to make an a appointment to have us evaluate your holdings.    leading rare coin expect speaks out and illustrates  how some rare coins have lost as much as 90% of there value within the last 6 -10 years!!!   read his alarming article: rare coins have huge downside risk   with very little foreseeable increase in value.  coins have been on a steady price slide for the last 3 -4 years .. over grading is a big factor … we urge you to call us for an evaluation of the pcgs and ngc coins you are holding..  1-800-953-3027 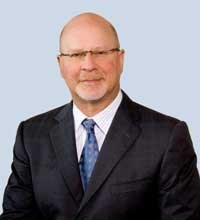 In November I announced that PCGS-certified coins would no longer be eligible for inclusion in the popular NGC Registry. I received many positive comments from those who have closely followed graded coin populations and prices. Others asked me, “Why? What is the difference between NGC and PCGS?”
Let me show you.
Over the last five years or so, I have noticed a perplexing trend at PCGS. There has been a dramatic increase in the grades assigned by PCGS for a wide range of coin types and, consequently, I believe that this has caused an extraordinary reduction in the value of many PCGS-certified coins.
As an NGC grading finalizer for the last 30 years, I have worked to ensure the accuracy and consistency of NGC’s grading. I have also closely observed the grading standards employed by our competitor and I can say with confidence that I believe that the grading standards PCGS uses today are completely different from the standards it used 10, 20 or 30 years ago.
It is my belief that the sudden change in PCGS grading standards around five years ago is harmful not just to collectors of PCGS-certified coins, but to the entire hobby
NGC has always focused on the positive in its marketing—we believe that our expert and impartial services speak for themselves. What is happening at PCGS, however, is so extreme in my opinion that I feel compelled to address it personally. I have been a collector for virtually my entire life and I care deeply about our hobby. I think it would be irresponsible for me to remain silent about the damage that I think is being done.
There are numerous examples of how the significant change in PCGS-certified coin populations for many coins has had what I believe is a devastating effect on the value of those PCGS-certified coins.
In January 2012, for example, the PCGS Population Report showed eight 1912-S Liberty Nickels graded PCGS MS 66, the highest grade then assigned by PCGS. Now, in January 2017, the PCGS Population Report shows 50 examples in PCGS MS 66 and two in PCGS MS 66 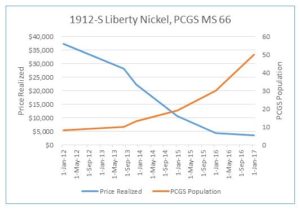 How is it possible that eight 1912-S Liberty Nickels were graded PCGS MS 66 in the company’s first 25 years and 44 other examples were graded PCGS MS 66 in the last five years? Imagine being the collector who bought a PCGS MS 66 for $37,375 five years ago based on the belief that it was one of only eight MS 66s and now seeing that there are 52 MS 66s and some are trading for $3,525!
There are similar examples across all US coin series, both vintage and modern. Below are some other extreme cases, all of which have been footnoted with third-party sources so that you can verify my research.
1939-S Washington Quarter, PCGS MS 67 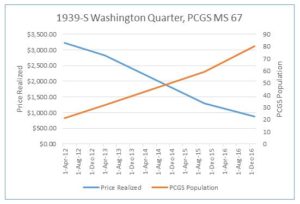 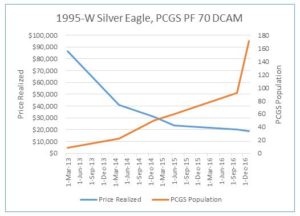 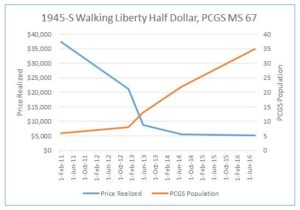 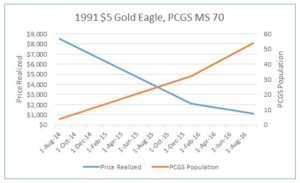 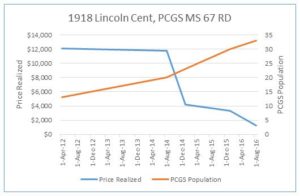 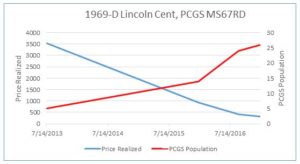 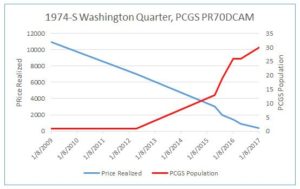 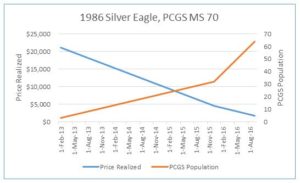 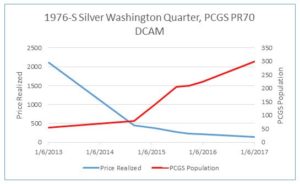 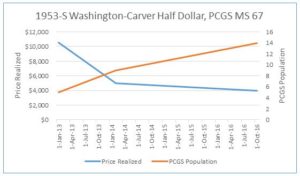 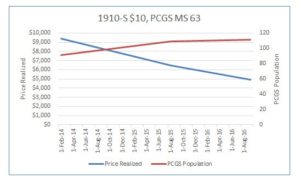 Let this sink in for a moment. Do you have PCGS-certified coins in your collection? Have you checked their populations and values recently?
Admittedly, these examples are some of the most extreme. There are many more that show less dramatic but I think still very obvious changes, and I believe that these cases are just as concerning, if not more so, because of their wide-reaching impact on the market.
These coins represent a cross section of types and eras. I think that they are simply far too diverse to be explained by a plethora of new hoards being discovered or a sudden wave of high-grade crossovers.
I do not know why these PCGS-certified coin populations have changed so dramatically in recent years, however. All I know is that it has happened and that there has been a profound reduction in value for many PCGS-certified coins.
Interestingly, I just read an article in Coin World over the weekend that describes a 1997 Lincoln Cent in PCGS MS 68 that sold for a strong price of $763.75. According to Coin World: “PCGS had graded 17 in this grade with none finer when the coin was offered last autumn, and the population has subsequently exploded, with the PCGS Population Report recording 24 as of December 2016.” This is exactly what concerns me.
The PCGS Population Report and auction prices realized are all public record, and the numbers do not lie. I encourage everyone to do their own research and see the facts for themselves before they buy any PCGS-certified coins—or any coin for that matter, including NGC-certified coins.
As a collector myself, there are some questions I always ask before making any purchase:

I encourage everyone to ask these same questions. An informed buyer is a smart buyer. And remember: buy the coin, not the holder.

Grading standards evolve over time as we study more coins and learn from our collective experiences, but I believe that this evolution happens glacially, not suddenly. I think that we, the third-party coin grading services, have a tremendous responsibility to collectors and dealers who have made buying and selling decisions based on our grading. It is essential to them and to us that we uphold our grading standards.
NGC is committed to doing the right thing for the hobby. We will continue to maintain our grading consistency as I and the rest of the NGC grading team have done for the last 30 years. At the end of the day, this is not about competition or profits for us, but protecting our fellow collectors.
Sincerely,

Thanks Howard 951-686-2122 To learn more visit Markham Numismatics the most trusted and reliable coin dealer for all your pcgs coins, silver eagles, foreign coins and more.